Today is September 11, the anniversary of our nation’s most atrocious terrorist attack. So it is fitting, perhaps, that the gospel reading from today happens to come from Mark’s account of the burial of Jesus. After Jesus died, we read:

Joseph of Arimathea, a prominent member of the Council, who was himself waiting for the kingdom of God, went boldly to Pilate and asked for Jesus’ body. Pilate was surprised to hear that he was already dead. Summoning the centurion, he asked him if Jesus had already died. When he learned from the centurion that it was so, he gave the body to Joseph. So Joseph bought some linen cloth, took down the body, wrapped it in the linen, and placed it in a tomb cut out of rock. Then he rolled a stone against the entrance of the tomb. (Mark 15:43-46) 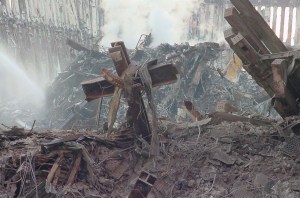 It all seems so final, doesn’t it? It looks as though death has won — just as it did on that terrible day 16 years ago when hijacked planes became guided missiles and forever altered our nation’s consciousness. But we know that this stone-sealed tomb was not the end of the gospel story, just like broken buildings and broken lives of 9-11 were not the end of American’s story. The darkness of death does give way to the light of hope — especially when allow ourselves to be drawn together by the Suffering Love that unmasks our need of grace and unites us in spite of our differences.

I’m reminded of a lyric by the singer/songwriter David Wilcox:

Look,
If someone wrote a play
Just to glorify what’s stronger than hate
Would they not arrange the stage
To look as if the hero came too late?
He’s almost in defeat;
And it’s looking like the evil side will when
So on the edge of every seat
From the moment that the whole thing begins
It is Love who mixed the mortar
And it’s Love who stacked these stones
And it’s Love who made the stage here
Although it looks like we’re alone
In this scene, set in shadows,
Like the night is here to stay
There is evil cast around us
But it’s Love that wrote the play
For in this darkness, Love can show the way

Today, we remember the pain, the heroic sacrifice, and the loss. But we also remember: “It’s Love that wrote the play,” and “Love can show the way.” May Love continue to write new and unexpected chapters that bring hope into our despair.

One thought on “In the Office: Love Will Show the Way”