Today’s New Testament lesson (Revelation 5:1 – 6:11) is one of my favorite passages of scripture, and — in addition to offering a powerful picture of the worship that unceasingly takes places around God’s throne — it may very well provide the key to understanding the Book of Revelation and being a follower of Christ.

John sees a scroll in the hand of God—a sealed scroll that contains the secret of God’s plan. But no one can be found who’s worthy to open the scroll and reveal its secrets; so John begins to weep. This, however, is when one of the heavenly elders interrupts his tears and says: “Do not weep! See, the Lion has triumphed! He is able to open the scroll.” (Verse 5). So John looks for the Lion, and he sees…a Lamb. And not just any Lamb, but a Lamb who was slain.

There is One who’s capable of unlocking the secret of God’s plan. There is One who’s worthy of receiving unending praise. But this One doesn’t exercise power and majesty in the way we normally think about such things. Instead, he reigns through suffering. He rules in the might of self-giving love. And those who would follow Him must do the same. 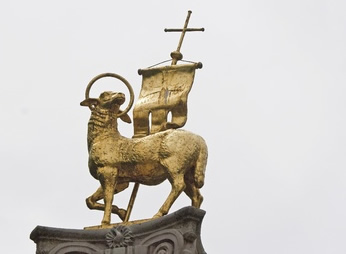 An ancient song of the church declares: “Vicit Agnus! Noster Eum Sequamur”—”Our Lamb has conquered! Let us follow him.” May we be reminded today that “the weakness of God is stronger than human strength” (1 Corinthians 1:25), and may we embrace the paradoxical humility and sacrifice in which we are exalted and given life.